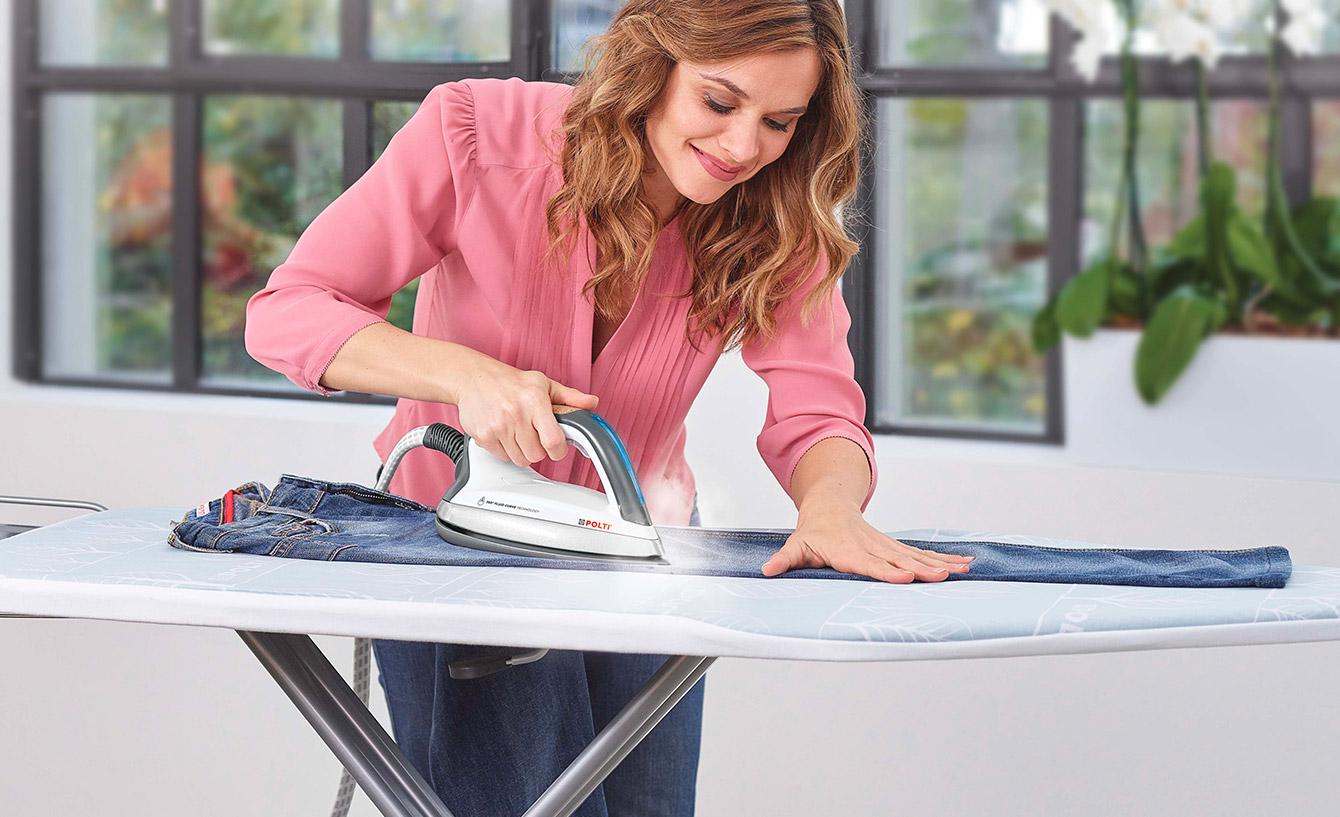 The science of effective ironing

The reason why creases are formed on fabrics lies in their very chemical nature. It is a process of breaking and forming intermolecular bonds regulated by heat, pressure and water. Understanding how this process works from a chemical point of view has allowed us to develop new ironing techniques that require less effort, as well as reducing the environmental impact by prolonging the life cycle of garments and decreasing energy consumption.

HOW CREASES ARE FORMED

Plant-based fabrics such as cotton, linen and hemp are made of cellulose, a linear polymer that is formed of glucose molecules linked to each other, like pearls in a necklace. Weak bonds called hydrogen bridges are created between the cellulose chains. These hydrogen bonds are particularly dynamic: they can break and reform easily. Even the simple pressure exerted by one garment folded on another is able to modify the hydrogen bonds of some fabrics; therefore, some garments tend to crease more easily.

The greater or lesser inclination to the formation of creases depends on the composition of the fabrics. Natural cellulose fabrics are those most subject to the formation of creases (cotton, linen ...). Fabrics made of regenerated cellulose fibre tend to crease less. These fibres are produced from natural cellulose, which is first subjected to chemical processes to be transformed into cellulose nitrate or acetate, and then reorganized into fibres. Rayon, viscose, acetate or tencel are examples of regenerated cellulose fibre fabrics. Synthetic fibres, such as polyester and nylon, are characterized by a more differentiated typology but generally tend to crease less. Finally, the fibres less prone to creasing are those of animal origin such as silk and wool.

One of the reasons why natural fabrics are enriched with synthetic or regenerated fibres, such as elastane or viscose, is to limit the formation of creases as well as improve elasticity and wearability.

The intertwining of the fabrics also influences the formation of creases, or the flat fabrics, like the fabric of a traditional shirt, tend to form more creases than the knitted fabrics, such as those of sweaters and sweatshirts, despite the composition being the same.

Another aspect to consider is the number of threads per square centimetre and the level of tension of the weave. The formation of creases is much higher the more the threads of the weave are loose. In addition, the threads are folded on each other, therefore the more they are stretched and pulled, the more they will remain straight in the fabric. For this reason, high-quality fabrics, such as those used for Manila mantons, are not subject to the formation of creases. On the contrary, low quality fabrics tend to form many creases because the threads are very distant, without a defined structure.

From a chemical point of view, the formation of creases is the result of a process of breaking and creating bonds which are influenced by factors such as humidity, temperature and pressure. The polymers that make up the tissues have two types of bonds: the strong bonds called covalent, which keep the monomers of which a polymer is made together, and the weak hydrogen bonds, which keep the polymers together.

Covalent bonds are too strong to be broken by the pressure or temperature that we normally use on clothes, but they weaken becoming more malleable. This process is known as glass transition, i.e. the mechanism by which an amorphous polymer passes into the glassy state, i.e. rigid and rearranged, due to the effect of pressure and temperature. Take for example cotton, whose glass transition point is at 22 ° C with a relative humidity of 78%; therefore, once these parameters are exceeded, the first folds will appear on the cotton.

Hydrogen bonds are weak enough to be interrupted by the action of pressure, temperature and humidity. The water molecules can position themselves between the cellulose polymers, affecting the bonds between each other, and this type of process is facilitated by heat. By drying, the garments lose the water molecules by evaporation and the hydrogen bonds are reformed, but in the new position taken by the garment, which can be smooth or have folds. Here is the reason why the garments are creased when we remove them from the washing machine and keep the creases once they are dry.

Cellulose-based fabrics such as cotton, linen and rayon, are the most prone to creasing since they can collect more water between their fibres than synthetic fabrics such as polyester and polyamide.

WHY DO IRONING ELIMINATES CREASES

Ironing basically means applying pressure and heat to fabrics. This action softens the fabric, which reaches the glass transition temperature, and allows us to reorder it until the cellulose polymers align as we wish. As the temperature decreases, the covalent bonds maintain the position imposed by ironing and new hydrogen bonds are created that maintain the new position stably. To facilitate the process, water vapor is also used. Water promotes the appearance of creases but, through the same mechanism, allows their elimination without the need to apply excessive pressure and temperature. By ironing with steam, we rearrange the cellulose polymers and introduce water molecules between the fibers that lead to the formation of new hydrogen bonds.

By applying steam, ironing is more delicate and maintains the integrity of the yarn, which is why it represents a determining factor for the care of the fabrics.

The environmental impact of the textile sector is undoubtedly high: from the manufacture of fabrics to the production and packaging of ready-to-sell clothing, not to mention the quantity of garments we buy and the speed with which we replace them, since their use cycle is always shorter than in the past. At the basis of this trend we find not only the culture of consumerism and the vagaries of fashion but also the quality and care of the garments. The spinning of the regenerated cellulose fibres is performed using a mechanism that allows you to adjust the degree of compression of the fibres that make up the yarn. Better and higher compression prevents the fibres from coming loose. When a part of the fibres comes off, the fabric is aged and is more easily subject to pilling, i.e. the appearance of unsightly "balls". This happens because the separate fibres establish new hydrogen bonds with each other but outside the weave of the fabric and this phenomenon affects both natural cellulose and regenerated cellulose fibres.

Ironing prevents the aging process, since it forces the fibres to maintain the bonds with each other within the weave of the fabric. In addition, it can largely reverse this process, as steam ironing forces the separate fibres to bind again to the main weft. And this is one of the reasons why ironing prolongs the useful life of the garments.

Over the centuries, ironing clothings also had the function of keeping pathogenic microorganisms away. About 70 years ago, it served to prevent three devastating infectious diseases that killed millions of people. The mere fact of naming them caused terror: typhus, fever from the trenches and recurrent epidemic fever. These 3 diseases are united by the same carrier organism: the pediculus humanus humanus, a parasite that lurks in the tissues of clothes.

In all likelihood, Greek and Chinese civilizations had already understood that ironing eliminated body lice. However, it was only during the North American Civil War that some doctors and nurses noted their observations on how ironing uniforms killed lice, inactivating their eggs. Health workers then began to recommend that soldiers iron their clothes very frequently, especially at the seams. It was an easy way to prevent typhoid.

But it was only with the First World War that the effects of ironing were the subject of rigorous studies. Conducted by both sides, several scientific studies showed that ironing represented the best solution to get rid of these parasites. Boiling clothes was also very effective. Nurses played an important didactic role in this sense and the practice of ironing became generalized.

At the end of the Great War, appliance manufacturers began producing millions of irons a year: one for each domestic hearth. The reason they ironed their clothes was not aesthetic but hygienic. 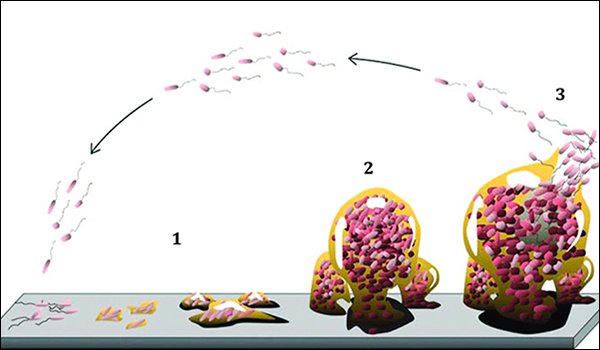 Formation of an organic film

Currently, according to surveys, 23% of people continue to iron for hygiene reasons. The temperature reached by fabrics with the iron is generally higher than that of washing; therefore some resistant pathogens nested in the fabrics are eliminated only by ironing, especially from natural fabrics such as cotton, which offer optimal conditions for the proliferation of microorganisms. Bacterial colonies shorten the useful life of the tissues, in addition to representing an outbreak of infection. And if these microbes manage to create an organic film, a consolidated colony practically impossible to destroy, the fabric turns into an unrecoverable waste.

THE ENVIRONMENTAL IMPACT OF IRONING

The textile sector is one of the largest producers of greenhouse gases and is responsible for around 10% of global emissions. Considering the complete life cycle of textile products, from production to disposal, consumers use the greatest amount of energy in the care of the product (i.e. washing, drying, ironing and other actions necessary for maintenance), affecting almost 39% of these greenhouse gas emissions. Therefore, the sustainable care of textile products is a fundamental aspect to reduce their environmental impact.

For the care of cotton fibres, high-energy consumption is required. For example, for a cotton T-shirt, 40% of the energy consumption is attributed to the realization while the remaining 60% derives from the actions performed by the consumer for his care, namely washing, drying and ironing. For this reason, low energy appliances should be used.

According to the Practical Guide to Energy Consumption prepared by the IDAE, Institute for Diversification and Energy Saving of the Spanish Ministry of Industry, Tourism and trade, in Spain an average home consumes around 4,000 kWh per year. If the house has all the equipment powered by electricity, 7% will be attributed to small appliances, including an iron.

Just to talk about ironing, there are two methods to reduce energy consumption. The first is to iron larger quantities of clothes at a time: instead of turning on the iron when we need a particular dress, it is preferable to iron several items together. The other method is to choose an iron with a boiler that allows you to save up to 46% compared to traditional steam irons, according to the IDAE report.

How chemistry can make your ironing easier. Mark Lorch, Professor of Science Communication and Chemistry, University of Hull. Published in The Conversation.